We wanted to tell you a bit about our gorgeous, lovely town, but others seem to have already done a great job at presenting Sighisoara, so here are their words. The following paragraphs have been taken from Lonely Planet:

” So resplendent are Sighişoara’s pastel-coloured buildings, stony lanes and medieval towers, you’ll rub your eyes in disbelief. Fortified walls encircle Sighişoara’s lustrous merchant houses, now harbouring cafes, hotels and craft shops. Lurking behind the gingerbread roofs and turrets of the Unesco-protected old town is the history of Vlad Ţepeş, Transylvania’s most notorious ruler; he was born in a house that is visitable to this day. Revered by many Romanians for protecting Transylvania from Turkish attacks, Ţepeş is better remembered as Vlad the Impaler, or Dracula, fuelling a local industry of vampire-themed souvenirs. (Lonely Planet)

The origins of Sighisoara city go back to the Roman times.
During the First Century AD, the Dacians (ancient inhabitants of the territory of modern Romania which eventually will develop into the Romanian people), built a fortification called Sandava.
Under the Roman administration it was known as Castrum Stenarum.
During the 12th century, the Transylvanian Saxons built a new citadel which was named Schäßburg.
Sighisoara (Schäßburg – Schassburg or Schäsbrich in German) still stands as one of the most beautiful and best-preserved medieval towns in Europe. “

Sighişoara’s delightful medieval buildings are enclosed within its citadel, a Unesco-listed complex of protective walls and watchtowers. Walking in the citadel is today a tranquil, fairytale-like experience, but these towers were once packed with weapons and emergency supplies, guarding Sighişoara from Turkish attacks (note the upper windows, from which arrows could be fired).

From the 14th to 16th centuries each of the 14 towers and five artillery bastions was managed by a different town guild, and the walls extended 903m. Surviving today are nine towers and two bastions.  (Lonely Planet)

The Tinsmiths’ Tower (Turnul Cositorilor) still shows traces of its siege in 1704.

The multicoloured tiled roof of Sighişoara’s Clock Tower glitters like the scales of a dragon. The tower was built in the 14th century and expanded 200 years later. It remains the prettiest sight in town, offering a magnificent panorama from the top. The views are as good a reason to visit as the museum inside, a patchy collection of Roman vessels, scythes and tombstones, and a scale model of the fortified town (English-language explanation is variable). (Lonely Planet)

Vlad Ţepeş (aka Dracula) was reputedly born in this house in 1431 and lived here until the age of four. It’s now a decent restaurant, but for a small admission, the staff will show you Vlad’s old room (and give you a little scare). Bubble-burster: the building is indeed centuries old, but has been completely rebuilt since Vlad’s days. 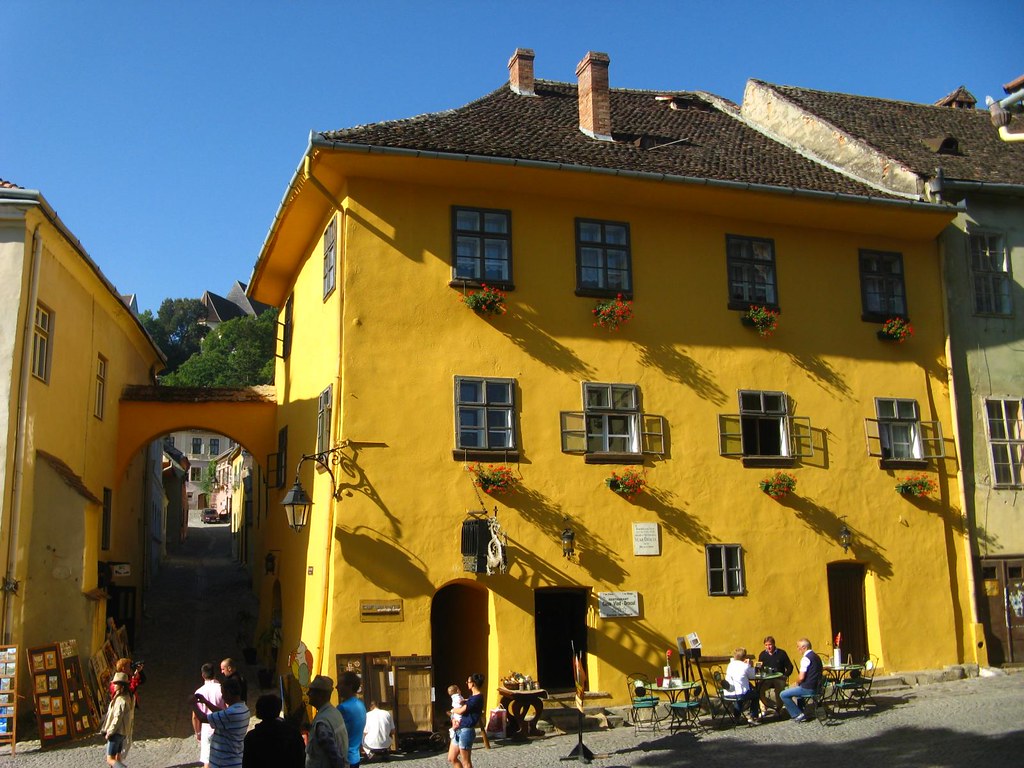 From Piaţa Cetăţii, turn south up Str Şcolii to reach the 176-step covered stairway, which has tunnelled its way up the hill since 1642. With light dappling through the roof and buskers at the top, it’s a charming ramble.

Church on the Hill

Don’t miss hiking up the covered stairway to ‘School Hill’ (418m) to admire this evocative late-Gothic, triple-naved church. Originally a 13th-century Romanesque basilica, it was restored in Gothic style across the 14th and 15th centuries. Inside, find traces of 15th-century frescoes, Renaissance furnishings, and an impressive Gothic altarpiece (1520).

There’s an atmospheric cemetery behind it. This lofty cemetery with views over Sighişoara is a suitably spine-chilling spot to ramble after visiting the church and covered stairway. (Lonely Planet)